It didn�t work. While the story of how it didn�t work might be interesting for anyone planning to build a pit kiln, my advice at this point would be not to.* At least not if you don�t have time to fail dismally in the beginning.

For those of you who didn�t get a chance (and why not, for pity�s sake!) to read my 13 page paper on man-made Amazonian soils whose high charcoal organic matter gave them particularly long-lasting properties beneficial to agricultural activities, here�s a brief rundown. The carbon left over after a low-oxygen, slow burning fire is high in super-stable aromatic carbon chains that hold onto nutrients and water. Also, you usually retain 30-50% of the original wood biomass instead of the usual 3% left over after a fire that burns the wood to ash. If you don�t then use that charcoal as fuel, it can be added to soil to improve properties like nutrient and water retention, tilth, drainage in clay soils and certain types of biotic activity. So.

I hired Cen�n to build and start two traditional pit kilns to ensure there would be a back-up supply of charcoal and try adding a different treatment to the mix. Due to a miscommunication, by the time I got to the site on Friday, the first kiln was almost finished. However, I ended up spending a fair amount of time over the weekend futilely trying to restart a totally dead fire in a hole in the ground filled with a mix of green and dry wood, that is, when I wasn�t trying to patiently explain to the proprietors of restaurantes and carnicerias that I was really interested in carting away any waste bones they had left over.

Monday the new kiln with the bones added, but otherwise exactly like the first, was slated to be started. I was able to assist with the hauling and watch throughout the whole process, ending up with a clearer understanding of why previous attempts to restart the other kiln the way I had been were doomed from the start.

Note: If you want to read on, note that this is a graphics-heavy post that was originally intended to serve as an illustrated instruction manual for the process. And just to ensure you don�t think I meant for this to be a complete downer post, I encourage you to enjoy the schadenfreude, or perhaps just to look at this cool local bug whose head used to be made into jewelry � 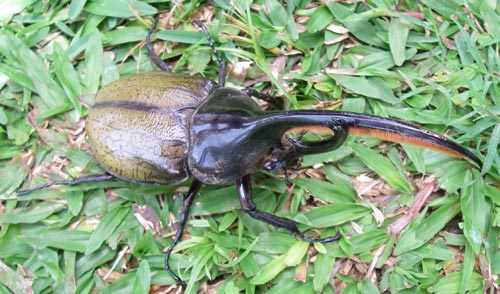 First, there�s the pit. The main body of it is 1.9m long, by 0.9m across at the top and a little narrower at the bottom, by 0.5m deep. The extra flares at the end extend for about another 0.4m. 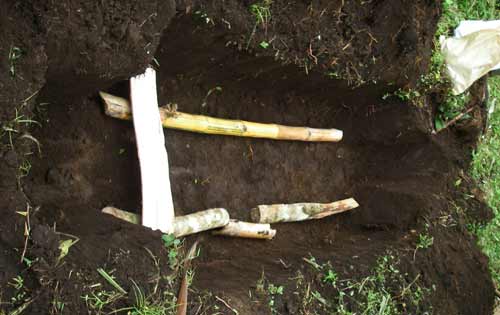 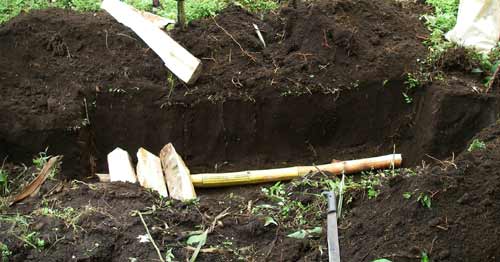 The main pit is then filled with logs cut to about 0.9m long and mostly laid across the width of the pit except for the larger pieces laid lengthwise across the very bottom, four pieces set in upright at the four corners and other pieces used to fill in gaps. Then in one of the end flares, you add kindling. The bones were put in with the logs and then covered with more wood in hopes of sufficiently cremating them so they could be safely used as an additive in my plant growth trials. It�s now prohibited to sell steamed bone meal in Costa Rica because the government was concerned about the potential to spread disease when used as cattle feed. That proved a little inconvenient, but I can�t argue with the sentiment. 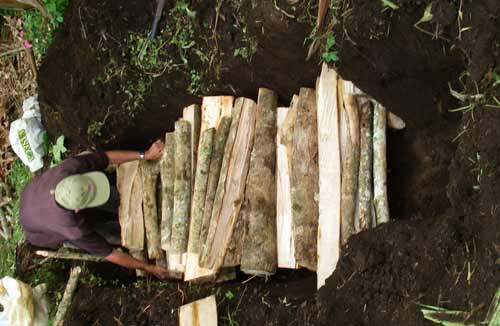 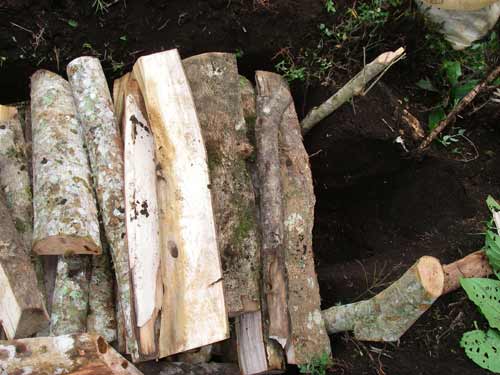 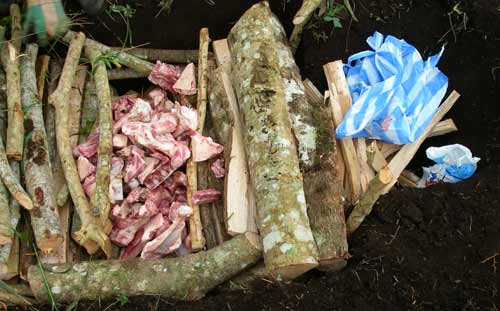 When the main pit is filled with wood, it�s overlaid with about 6-8cm of freshly cut weeds and greens to keep dirt out of the fire, then covered with a few centimeters of dirt just a little less thick than the layer of greens that�s walked on until it�s stamped down pretty tight. 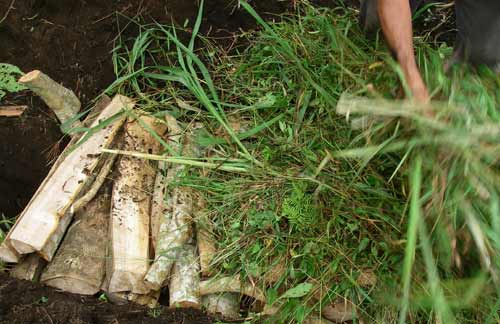 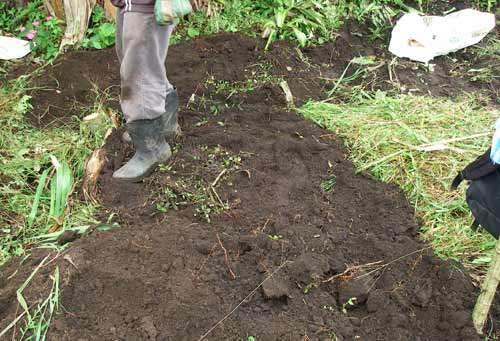 It was finally time to light the pile. I wasn�t thrilled when it became clear that the method for getting the kindling going was to burn plastic bags over and among it. 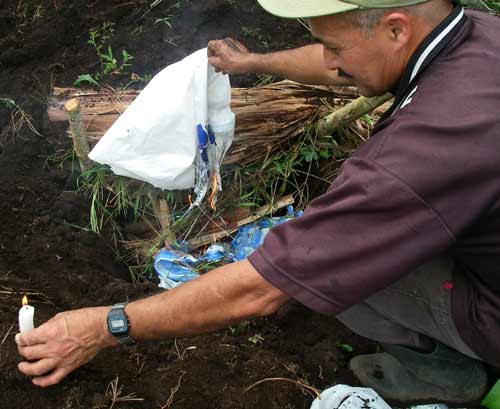 Cen�n explained that paper burned too fast to be a good material and if you�ve never been here, I can only say that the difference in the amount of paper used in Costa Rica compared to in the U.S. is vast. Bluntly, not much money is spent here on non-food items that are used once and thrown away; there isn�t a lot of junk mail and I�ve only been in two houses that used paper towels in the kitchen. I don�t really know enough to say differently, but considering that Cen�n used to do this for a living before you could buy charcoal at the market, I suspect that this is simply the most likely way such a fire would be started if this technique came back into wide use. In that light, I didn�t argue.

A farming practices manual from the Costa Rican government that described a similar process seemed to call for using a bar of zinc to start the blaze going, but I have to think that the likelihood of someone around here buying such an exotic material, when a free plastic bag from the store would serve as well, is slim to none. Also, it�s so damp here that it�s hard to get a match going very well or to keep it going once it�s started burning. When you�re trying to start a fire in a hole in the ground, this is a major pain in the tookas.

It�s a simple mechanical issue, but I think it�s the sort of technical difficulty on which whole development projects could stumble. Things are really just different here from what I�m used to; in ways that I could list in tedious detail without perhaps ever being able to get it across to someone who�d never been here or a similar country and in spite of the fact that Costa Rica is relatively westernized. Basic questions of what constitutes an �available� material for a given purpose can have a multitude of answers. If someone wanted to help a community in another country, I think there could never be an appropriate substitute for going thereto live and talk with the people. I can see now that hotel visits barely count, in so, so many ways.

Once the fire was started, Cen�n fanned it to get it going until there was a good amount of smoke coming out of the other flare and about 4 additional holes he made in the top of the mound near the side away from the fire. He followed the same process when restarting a fire with additional kindling in the first kiln. 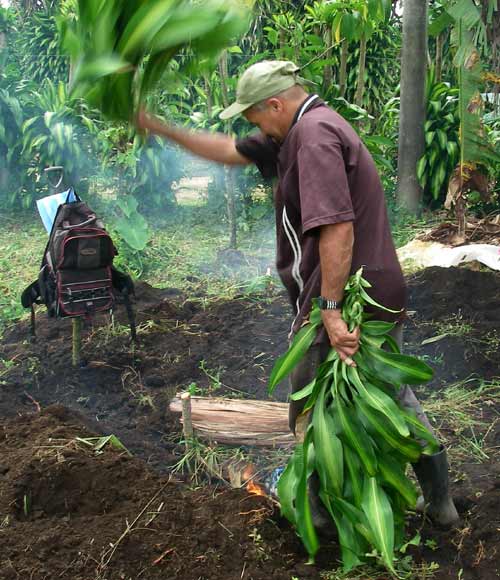 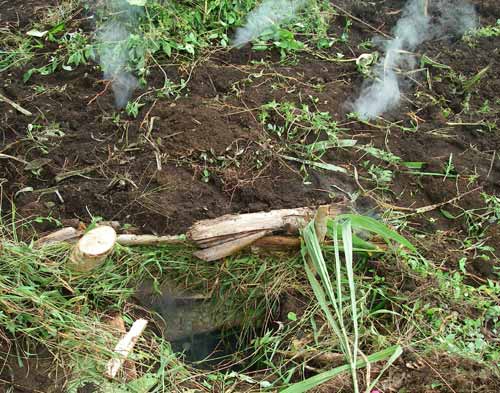 This fire was allowed to burn for about an hour before being covered with greens and then dirt. Another hour later, a metal chimney pipe was added to the flare on the other side, then packed around with greens and dirt. 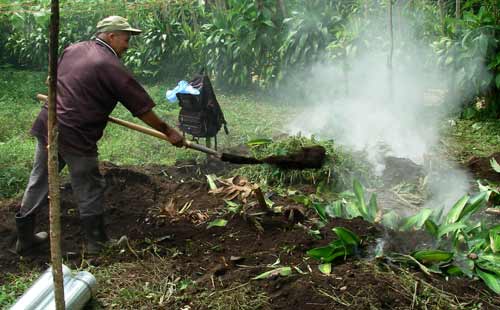 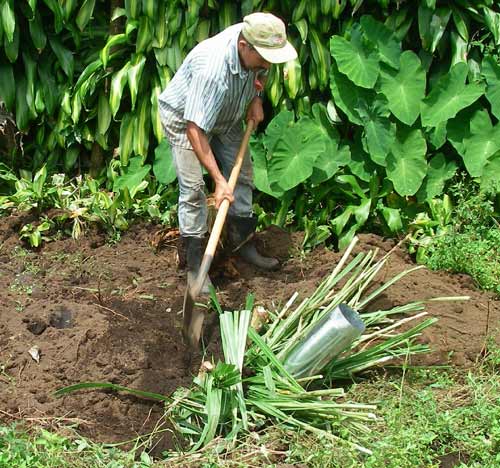 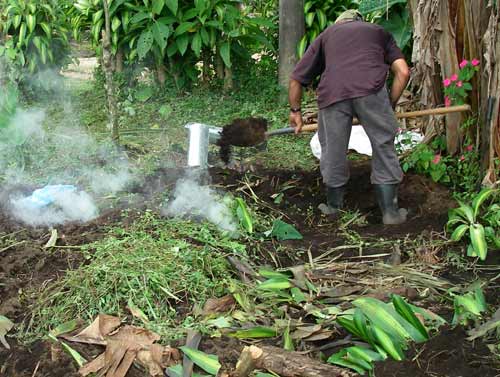 A longer assembly of chimney piping can be added if you want to capture the vapor condensate. This was done with the first kiln, but was removed to allow greater airflow and the extra piping added to the chimney of the second kiln. The close-ups of the chimney assemblage were taken during the finishing of the first kiln.

The smoke seemed to be coming pretty well by the time everything was closed up and there was nothing much more to do than wait, check to see if they were still working two or three times a day and hope. The new one quit on Thursday, while the first one didn�t stop giving off heat until Friday. 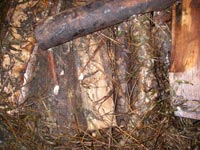 Nonetheless, when I opened the pits up the first chance I got in between torrential downpours on Sunday, the top layers were clearly nothing but heavy piles of moldy wood. They�d been rained on when the following pictures were taken, but when I first dug open the top, clouds of mold spores poured into the wind. Thank goodness it was blowing the other direction, this thing was like the set of a horror movie.

Much as I didn�t want to, the only choice left if I wanted to get started on my project was to use bags of charcoal from the store. Any charcoal that might be underneath of all this heavy, moldy, green wood is effectively unrecoverable within the necessary timeframe. That timeframe being approximately, �nearly too late to salvage.� Additionally, walking on the piles and stomping at them with my (mumble, mumble) pounds of weight and very heavy hiking boots elicited no significant compression or settling as might happen if some of the logs at the bottom of these half meter piles had in fact burned through as expected.

On the bright side, store bought charcoal still constitutes a locally available material and is recognizably composed of a former tree, instead of being mixed with god-knows-what and compressed into identical briquettes. I�m counting my blessings and readjusting my expectations, oh yes. At this point, it�s keeping the mellow on, experiment-wise.

We�ve also just entered the canicula period of summer, after the relatively dry 2-3 weeks of the summer of San Juan. This means that we have warm to cool summery weather in the morning and downpours starting from sometime between noon to three that last until eight or nine at night. I�m told that starting around the 15th of August, it�s really going to start raining. This isn�t too bad, just means that it�s better to get things done for the day before lunch. Additionally, I clearly brought too much sunscreen and not enough bug spray.

If you were wondering though, without a trace of irony or sarcasm, I�m having a fabulous time and would gladly stay longer than I�ve planned to.

* It must be granted that a good few people used to make charcoal in pit kilns around here and that this is a widespread practice throughout the tropics. But it clearly isn�t entirely simple and it seems that once the immediate, hands-on experience falls into disuse, a learning curve is required. Still, if I tried this again with similarly limited time, I think I might well want to find a more reliable method for beginners and those who haven�t tried it for a while.